Let's go back in the '50s. Amongst the most famous and praised Italian comic book authors of the period we find the "ESSEGESSE" team. ESSEGESSE actually stands for S.G.S., which were the initials of the authors' names: Sinchetto Giovanni, Guzzon Dario and Sartoris Pietro. They were behind the creation and/or publication of some of the most interesting titles of the time; let's name only a few: KINOWA, text of Andrea Lavezzolo, drawings of the ESSEGESSE team, was one of the most mature readings in the Italian comics world of the '50s; created in the 1950, the character was a masked vigilante whose adventures were set in the Old American West. The character's personal story was a little disturbing for the time: Kinowa as a young boy saw his parents killed and himself scalped by a group of hostile American Indians, and since then he sought revenge against anyone related with the killers of his parents!
CAPITAN MIKI was a considerably less dark and violent character: the ESSEGESSE created him in 1951 and they were both writers and artists of Captain Miki's adventures. The series narrates the adventures of a young Nevada Ranger, the first of a long series of teenage heroes in the Italian comics (Un Ragazzo nel Far West, Il Piccolo Ranger, Kit Willer son of Tex Willer, to name only a few).
The other ESSEGESSE's creature also enjoyed an immense popularity amongst the young readers of the '50s: IL GRANDE BLEK, a.k.a. as BLEK MACIGNO, created in 1954. The series somewhat distanced itself from the all-present Old Western settings of the other comic books of the period; the trapper Blek, the hero of the series, and his friends lived their adventures during the American Revolution, fighting against the evil Redcoats for America's freedom. The popularity of the weekly strips of IL GANDE BLEK was great, and the sales increased considerably week after week.
This success probably impressed Sergio Bonelli, the owner of the Sergio Bonelli Editore colossus (the main publisher of comic books in Italy) so much that years later, in 1966, he asked the ESSEGESSE to repeat Blek's formula in another similar monthly series. This was the origin of IL COMANDANTE MARK (Commander Mark). Mark was the chief of an irregular American militia called LUPI DELL'ONTARIO (Ontario's Wolves) fighting the hated Redcoat during the American revolution. From their headquarters at Fort Ontarrio, our heroes launch themselves in dangerous and daring missions, issue after issue. Mark's friends and sidekicks were Mister Bluff, a former pirate and adventurer, Gufo Triste (Sad Owl) an emaciated Indian with a very pessimistic nature, Flok, Mister Bluff's dog, and Betty, Mark's eternal girlfriend. 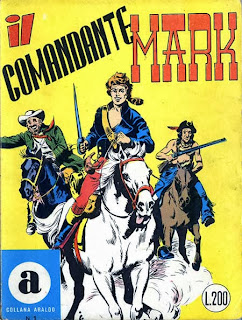 The cover of the first issue already introduced the three main heroes of the series. Clearly Mark was the dominating figure, sword in the hand, smiling, gallopping free and confident toward the next battle. Behind him, Mister Bluff and Gufo Triste are trying to follow him but clearly they aren't worth their chief. This will be a permanent pattern in the series: the two sidekick will be useful to Mark, but basically their main role is to offer some comic relief during the dramatic expolits and adventure of th Commander.
Mark was present in every cover of the series, mainly in heroical attitudes 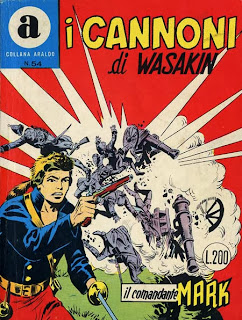 The world of IL COMANDANTE MARK was a world where one could immediately recognize the good from the evil.
The Redcoats, for example, were almost invariably depicted as a drunken, stupid and violent mob; their evilness was reflected by their generally ugly appearance, which was in striking contrast with the nice look of Mark. 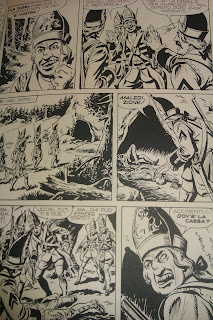 Mark's girlfriend, Betty, is depicted as a very jealous character. And apparently, her jealousy is justified, since Mark is not indifferent to other women's beauty. This often caused trouble in their relation 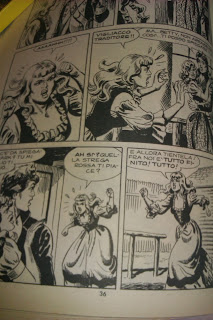 The stories have a generally simple plot, but are fresh, funny and highly redeable. Mark and his "wolves" are irregulars and their missions are usually the most dangerous and risky, and more than often they must infiltrate amongst the British ranks. Most of the stories indeed are about Mark fighting (and defeating) the Brits, but sometimes there are some nice variations on the main theme: in an unusually long saga (3 issues), for example, Mark goes to Africa to rescue a kidnapped Betty in a mistery journey involving Living Mummies, Holy Monkeys and Forgotten Civilizations. In another adventure, Mark finds two immortal men fighting each other. These are only but a few examples.
The series enjoyed a great success lasting 281 numbers and ending his publications in Jan.1990 (even if some special issues were published again afterwards). From 1966 to 1990, the series was able to collect a loyal readership, thanks to its main hero, to his funny sidekicks, to the simple but entertaining plots. It's incredible how a narrative formula basically born in the middle '50s was able to withstand through the '70s and '80s in competition with more elaborate and adult comics. This is probably the best proof of ESSEGESSE's skill as story-tellers. Throguh 281 numbers, Mark was the scourge of every Redcoat of every Redcoat serving on American soil: his naive adventures amongst immense forests, great rivers, hostile or friendly Indian tribes, greatly charmed the imaginary of the readers.
Then came 1990. One of the ESSEGESSE authors died, and the other two were old. A veteran of Italian popular comics, the female artist Lina Buffolente, was called to help finishing the last stories. But the times of the daring exploits of Mark and his militia were gone. The success of more modern, more mature comics such as Dylan Dog made cruelly evident the vintage candour of Mark's adventures.
Suddenly the decision was taken of ceasing the publication of IL COMANDANTE MARK. A "last story" was written in all haste, combining an old ESSEGESSE unpublished plot with brand new pages by author Mauro Boselli which saw the "Last Victory" of the Americans over the Brits (this was the title of the story: L'ULTIMA VITTORIA, i.e., the Last Victory) and FINALLY the marriage between Mark and Betty. 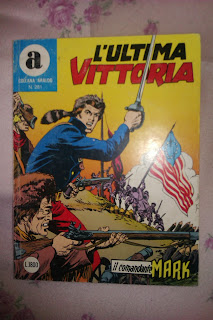 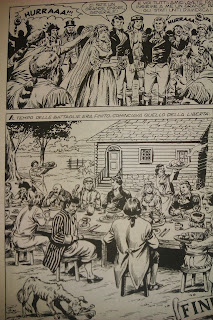 So the Great Epic ended. Mark lay down the sword and became a perfect husband, his daring exploits living probably only in his memoirs. But certainly the readers didn't forgot him. Immediately after the end of the publications, a complete reprint of Mark's adventures appeared in the newstands, celebrating him as one of the more present heroes in Italian comic books collections.
Pubblicato da Antonio a 05:31