It's probably inevitable that the first review of the blog is a Superman review.
I can't really say why I prefer Superman over all other superheroes published by DC and Marvel. I started reading Superman out of curiosity: since in Italy the popularity of Big Blue's comics is really low in comparison to that of Marvel or Batman titles, many years ago (I was 15 or something) I bought a Superman issue to try to understand why he was so underrated. And, yes, also to pose myself as "the expert of unusual comics" in my school :) The first issue I found was an o-o-o-o-o-o-ld Mondadori book which published the story THE LAST DAYS OF SUPERMAN ("Not a hoax! not a dream! But real!"), i.e. number 156 of the American original edition. I was lucky, since the story is one of the best Superman tales of the Silver Age and as a consequence I fell in love with the character.
I still buy literally all the Superman titles published by DC Comics today, but the Silver Age version of the Man of Steel is my favorite. Often dismissed as "childish tales", the Superman tales of the Weisinger era sported an extraordinary perception of human feelings and motives. In my opinion a great sensibility lay behind the typical Silver Age mask of alien invasions from outer space, or bizarre transformations of human bodies.
Superman #137 is a text-book example of my point.
This is the American cover 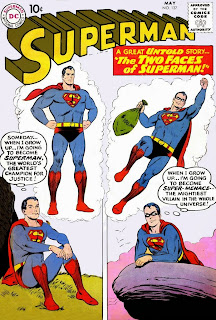 As a premise, I must say that I DID NOT POSSESS Superman #137.
I have the SUPERALBO NEMBO KID # 5. Nembo Kid was the name Superman was know with in Italy back in the 60's. The origin of the name is debated, but still remains a mistery. As a consequence of the change of name, the "S" on Superman's chest was erased ON EVERY PANEL of EVERY Superman Italian publication, leaving him with just a bizarre empty yellow shield on the chest. Generally speaking, the Italian editions were less colorful than the American originals. I mean, LITERALLY less colorful: only two pages each four were in full colors, the others were in b/w. The balloons on the covers also were cancelled. Below it was the cover of the Italian edition 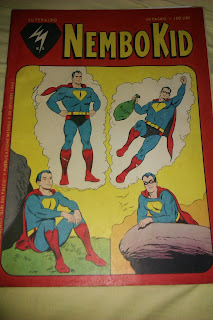 The story is divided in 3 parts, and the original titles are: THE SUPER-BRAT FROM KRYPTON; THE YOUNG SUPER-BULLY; SUPERMAN VS.SUPER-MENACE. It's interesting to see how the name Super-Brat is a clear opposite of Superbaby, Super-Bully of Superboy, and Supermenace of Superman.
The Italian titles are BIRBA KID; MALANNO KID; CRIMINAL KID.
The authors of the story are: JERRY SIEGEL (text), CURT SWAN (pencils), JOHN FORTE (inks).
About Jerry Siegel, we'll just say that during the Silver Age he changed considerably his writing, adapting it to the new "Weisinger Superman" who is very different from his Golden Age counterpart. Siegel's texts are now more fantastic, less realistic and socially involved than his previous Superman tales of the 40's. The enemies in Siegel's Silver Age stories are worlds-destroying aliens, creatures of pure energy, bizarre animals, and so on, and no more the gangsters or the violent husbands of his beginnings.
This change did not affect the ability of Siegel. His texts are still fresh, funny, with a peculiar ability in reproducing human emotions.
Curt Swan just is the best artist ever seen on Superman comic books. Okay, there may have been BETTER, more sophisticated pencillers in modern times, but nobody had ever reached the ability of Swan in creating a Superman who is so.....Superman: strong but human, almost dreaming; smiling but also slightly gloomy. Swan is one of the best comic books artist I ever saw.
The inks of John  Forte are pretty good as well.
The story opens with a clearly deceptive couple observing a masked super-brat evading by a fake toy-prison. 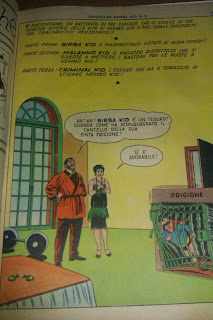 Who is he? Is he Superbaby turned evil? Why is he masked?
Suddenly we step back in time, at the begin of the Superman mythos: the explosion of Krypton. We see Lara and Jor-El, Superman's parents, launching the rocket ship with the little Kal-El inside, just seconds before the total destruction of the doomed planet.
This is a scene that had been repeated millions of times in previous Superman titles. But now we learn a new detail about Kal-El's trip to Earth: his rocket ship clashed against a mysterious big spaceship from God-knows-what solar system; the incident left Kal's rocket ship undamaged, but from the big spaceship a strange laser is fired, the effect of which is to DUPLICATE the rocket ship with Superbaby inside. 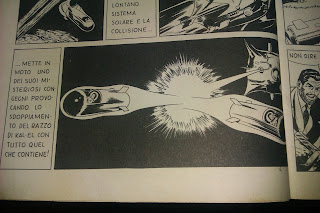 The shocking consequence is that now there are TWO SUPERBABIES heading toward Earth.
This is an untold story in Superman's past and the attention of the reader is immediately captured.
Both rocket ships landed on Earth in the vicinity of Smallville. The fate of the "right" Kal-El is not told: after all, everybody knows that he is found and adopted by a lovely couple, the Kents. The story focuses on the fate of the "duplicate" of Kal-El. He is less lucky. He's found by a couple of criminals, "Wolf" Derek and his wife Bonnie. 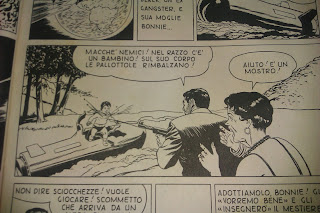 The difference between the fate of Kal-El and that of Super-Brat (this will be the name of the duplicate baby) are striking. Kal is found by a couple who donate him all the love possible; they protect him, they teach him the meaning of justice, and the value of doing good to others. Super-Brat is found by a couple full of fear and hate: they greeted him by shooting him and calling him freak.
The paths of Kal-El and Super-Brat are already diverging. I think that we have a great lesson here, a typical Silver Age lesson, I'd say: the importance of education and parental love on a man's life. We'll come back on this later.
Wolf Derek decides to adopt the child anyway: faking a non-existing love for him, Derek trains the child to become a supercriminal. Derek's goal is to use his super-son to eliminate Superman and become himself the King of Gangsters.
The first contact between Super-Bully (teen version of the duplicate baby) and Superboy (teen versions of Superman) happens in the second part of the tale 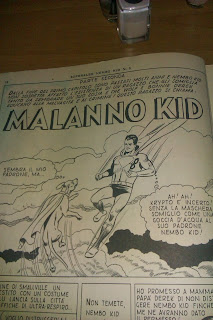 In his teen years Super-Bully is already a dangerous criminal: he causes natural disasters (which are promptly limited by Superboy), he helps scoundrels, frustrates the police....
The result of Derek's education is clear, now.
The relation between father and son is complicated. Super-Bully clearly loves his father and admires him. But Derek's love his only a trick. Inside him, he hates and fears Super-Bully.
The story continues. Strangely enough, for a perfect duplicate of Superman, Super.Bully is invulnerable to Kryptonite. This discovery makes Derek happy, because it's clear that his boy is stronger than Kal-El. 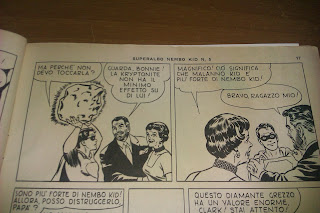 For Super-Bully, this is an hollow moral victory. He is tormented by the jealousy toward Clark kent/Superboy, whose secret identity he knows. Clark has a couple of loving parents, has friends, has everything. 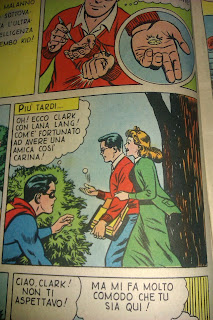 The image of Super-Bully secretly spying the happy life of Clark Kent is one of the saddest things I ever read in Superman comics. His education in hate and in the culture of brute force prevented Super-Bully from experiencing real teenage happiness.
It's not a surprise that he nurtures a deep hatred from Superman until his adult age, when his change in Supermenace (Criminal Kid, in the Italian version). It's showdown time between him and Superman 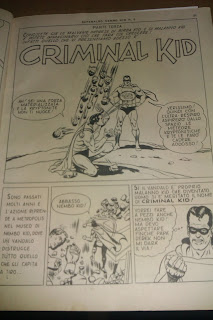 There is something similar between Supermenace and Bizarro. Both are Superman duplicates, but there is a great difference. Bizarro's mind is twisted for the beginning; he is a pathetic and imperfect creature that doesn't understand the world of normal peoples and, as a consequence, creates a world at his own image. For Supermenace, the path of evil has not been an entirely conscious choice, but the fruit of a depraved education; had he been educated by the Kents, probably the duplicate wouldn't be that different from Kal-El.
Enough philosophy, it's destruction time! During a gangster meeting, Derek communicates to his fellow criminals, the intention of using Supermenace to destroy Superman. Supermeance is happy, finally his dream of a mortal duel with Superman is coming true! But before he flies away to face Superman, Supermenace with his X-Ray vision and super-hearing, grabs his father's voice talking with the other criminals and boasting that he had just faked love for Supermenace during all those years, with the only purpose of using him as a weapon against Superman.
The world of Supermeance collpases at this new. He realizes that his entire life has been an empty lie. As a consequence, his hatred toward the heroical Superman increases. Superman had had everything in his life, while he, Supermenace, had just been a toy in the hand of a stupid gangster. It's significant that the focus of Supermenace's jealousy is the love of the Kents for Kal. 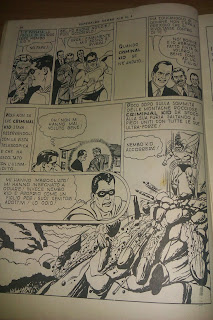 The big fight between the two super-creatures begins. The world itself seems collapsing on the wake of their fury. The Leaning Tower of Pisa crumbles down, a rare homage to my country in DC Comics (although the Tower of Pisa itself, as far as I remember, appears a time again in a Superboy story and also in a Supergirl tale) 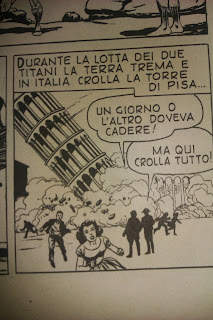 At the end of the duel, Supermeance defeats Superman. Being invulnerable to Kryptonite radiations, Supermenace use them to bring the Man of Steel down. Before the defeat, Superman discovers and reveals to Supermenace that he is not a true man, he doesn't have veins, or muscles, he is just pure energy in human form; the duplicating ray of the big spaceship at the start of the story just created a likeness of Superman, with similar powers, but formed only with energy and not entirely human.
This new humiliation further enrages Supermenace. 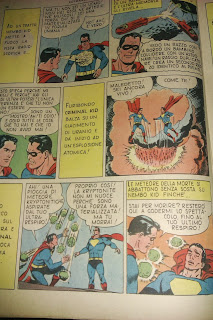 But just when the Man of Steel is passing away, the unthinkable happens. Supermenace thinks back of his life, and discovers that the true responsible of his wasted youth is Wolf. The criminal had educated him to hate, fear, jealousy, violence, and this only to follow his dirty plans. Supermenace realizes that Superman is innocent, and at the last moment, saved his life.
Another great morale behind this story. The education of our parents is important, of course, and the story of Supermeance shows it: but in the end, the choice of what men we want to be is on us, and on us only. The rebellion of Supermenace to his "father" shows that a change, a conversion, is always possible, even in the most twisted and ruined minds.
The end of the story is tragic. Supermenace goes back to face his "parents". Again, it's showed the depravity of the couple, and the natural fate of every life based on hate and evil: facing Supermenace and fearing his fury, Derek and his wife Bonnie at first quarrel each other, and then start insulting Supermenace. They try to make him feel guilty of his "different" status.
Supermenace without any further reason of life, ends his tragic existence by coming back to his natural status of pure energy and in doing so purposely killing Derek and his wife. Superman watches powerless at the scene, feeling sorrow for the ultimate fate of the tragic creature. 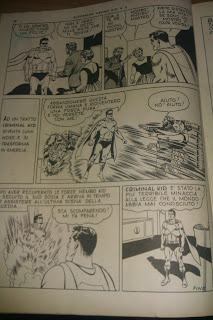